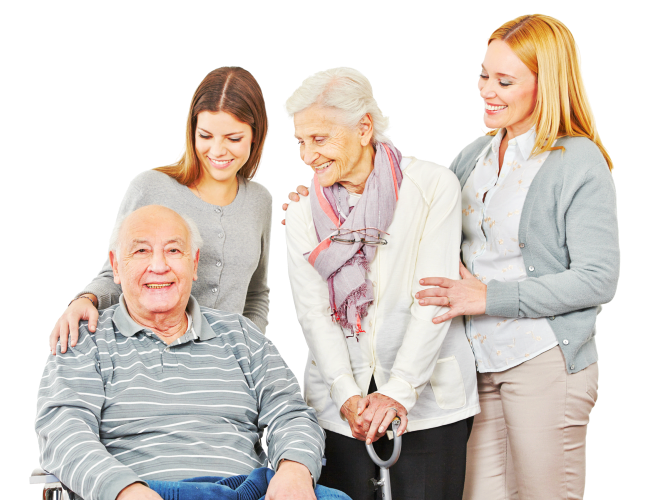 A touch of kindness goes a long way!

Dementia is not a specific disease. It’s an overall term that describes a wide range of symptoms associated with a decline in memory or other thinking skills severe enough to reduce a person’s ability to perform everyday activities. Alzheimer’s disease accounts for 60 to 80 percent of cases. Vascular dementia, which occurs after a stroke, is the second most common dementia type. But there are many other conditions that can cause symptoms of dementia, including some that are reversible, such as thyroid problems and vitamin deficiencies. Dementia is often incorrectly referred to as “senility” or “senile dementia,” which reflects the formerly widespread but incorrect belief that serious mental decline is a normal part of aging. While symptoms of dementia can vary greatly, at least two of the following core mental functions must be significantly impaired to be considered dementia: MEMORY, COMMUNICATION AND LANGUAGE, ABILITY TO FOCUS AND PAY ATTENTION, REASONING AND JUDGEMENT, AND VISUAL PERCEPTION.

People with dementia may have problems with short-term memory, keeping track of a purse or wallet, paying bills, planning and preparing meals, remembering appointments or traveling out of the neighborhood. Many dementias are progressive, meaning symptoms start out slowly and gradually get worse. If you or a loved one is experiencing memory difficulties or other changes in thinking skills, don’t ignore them. See a doctor soon to determine the cause. Professional evaluation may detect a treatable condition. And even if symptoms suggest dementia, early diagnosis allows a person to get the maximum benefit from available treatments and provides an opportunity to volunteer for clinical trials or studies. It also provides time to plan for the future.

What are the Different Types of Dementia?

Dementias can be classified in a variety of ways and are often grouped by what they have in common, such as what part of the brain is affected, or whether they worsen over time (progressive dementias).

Types of dementias that worsen over time include:

Alzheimer’s disease. In people age 65 and older, Alzheimer’s disease is the most common cause of dementia. People generally may develop symptoms after age 60, but some people may have early-onset forms of the disease, often as the result of a defective gene. Although in most cases the exact cause of Alzheimer’s disease isn’t known, plaques and tangles are often found in the brains of people with Alzheimer’s. Plaques are clumps of a protein called beta-amyloid, and tangles are fibrous tangles made up of tau protein. Alzheimer’s disease usually progresses slowly over seven to 10 years. Your cognitive abilities slowly decline. Eventually, the affected areas of your brain don’t work properly, including parts of your brain that control memory, language, judgment and spatial abilities.

Frontotemporal dementia. This less common cause of dementia tends to occur at a younger age than does Alzheimer’s disease, generally between the ages of 40 and 65. This is a group of diseases characterized by the breakdown (degeneration) of nerve cells in the frontal and temporal lobes of the brain, the areas generally associated with personality, behavior and language. Signs and symptoms of frontotemporal dementia can include inappropriate behaviors, language problems, difficulty with thinking and concentration, and movement problems. As with other dementias, the cause isn’t known, although in some cases this dementia is related to certain genetic mutations.

Other disorders linked to dementia

Huntington’s disease. This inherited disease causes certain nerve cells in your brain and spinal cord to waste away. Signs and symptoms usually appear during your 30s or 40s. People may experience personality changes, such as irritability or anxiety. The condition causes a severe decline in thinking (cognitive) skills over time. Huntington’s disease also causes weakness and difficulty with walking and movement. Traumatic brain injury. This condition is caused by repetitive head trauma, such as experienced by boxers, football players or soldiers. Depending on the part of the brain injured, this condition can cause dementia signs and symptoms such as uncoordinated movement and impaired speech, as well as slow movement, tremors and rigidity (Parkinsonism). Symptoms may not appear until many years after the actual trauma. A person who has experienced a single traumatic head injury could develop a similar condition called post-traumatic dementia, which may cause symptoms such as long-term memory problems.

Signs and symptoms of this fatal condition usually appear around age 60 and initially include problems with coordination, memory, thinking and vision. Symptoms worsen over time and may include the inability to move or talk, blindness, or infections.

What are the Warning Signs of Dementia?

The symptoms of dementia vary, depending on the type of disease causing it. If someone is exhibiting these symptoms, the person should check out his or her concerns with a healthcare professional. Awareness of these warning signs is not a substitute for a structured screening or consultation with a primary care provider. Relying on memory helpers, trouble finding words, struggling to complete familiar actions, Confusion about time, place or people, Misplacing familiar objects, onset of new depression or irritability, making bad decisions, personality changes, loss of interest in important responsibilities, seeing or hearing things, expressing false beliefs.

Alzheimer’s is the most common form of dementia, a general term for memory loss and other intellectual abilities serious enough to interfere with daily life. Alzheimer’s disease accounts for 50 to 80 percent of dementia cases. Alzheimer’s is not a normal part of aging, although the greatest known risk factor is increasing age, and the majority of people with Alzheimer’s are 65 and older. But Alzheimer’s is not just a disease of old age. Up to 5 percent of people with the disease have early onset Alzheimer’s (also known as younger-onset), which often appears when someone is in their 40’s or 50’s. Alzheimer’s worsens over time. Alzheimer’s is a progressive disease, where dementia symptoms gradually worsen over a number of years. In its early stages, memory loss is mild, but with late-stage Alzheimer’s, individuals lose the ability to carry on a conversation and respond to their environment. Alzheimer’s is the sixth leading cause of death in the United States. Those with Alzheimer’s live an average of eight years after their symptoms become noticeable to others, but survival can range from four to 20 years, depending on age and other health conditions. Alzheimer’s has no current cure, but treatments for symptoms are available and research continues. Although current Alzheimer’s treatments cannot stop Alzheimer’s from progressing, they can temporarily slow the worsening of dementia symptoms and improve quality of life for those with Alzheimer’s and their caregivers. Today, there is a worldwide effort under way to find better ways to treat the disease, delay its onset, and prevent it from developing.

What are the Top 7 Alzheimer’s Myths?

Myth 1: Memory loss is a natural part of aging. Reality: As people age, it’s normal to have occasional memory problems, such as forgetting the name of a person you’ve recently met. However, Alzheimer’s is more than occasional memory loss. It’s a disease that causes brain cells to malfunction and ultimately die. When this happens, an individual may forget the name of a longtime friend or what roads to take to return to a home they’ve lived in for decades. It can be difficult to tell normal memory problems from memory problems that should be a cause for concern. The Alzheimer’s Association has developed information to help you tell the difference. If you or a loved one has memory problems or other problems with thinking and learning that concern you, contact a physician. Sometimes the problems are caused by medication side effects, vitamin deficiencies or other conditions and can be reversed with treatment. The memory and thinking problems may also be caused by another type of dementia.

Myth 4: Drinking out of aluminum cans or cooking in aluminum pots and pans can lead to Alzheimer’s disease. Reality: During the 1960s and 1970s, aluminum emerged as a possible suspect in Alzheimer’s. This suspicion led to concern about exposure to aluminum through everyday sources such as pots and pans, beverage cans, antacids and antiperspirants. Since then, studies have failed to confirm any role for aluminum in causing Alzheimer’s. Experts today focus on other areas of research, and few believe that everyday sources of aluminum pose any threat.

Myth 5: Aspartame causes memory loss. Reality: This artificial sweetener, marketed under such brand names as NutraSweet and Equal, was approved by the U.S. food and Drug Administration (FDA) for use in all foods and beverages in 1996. Since approval, concerns about aspartame’s health effects have been raised. According to the FDA, as of May 2006, the agency had not been presented with any scientific evidence that would lead to change its conclusions on the safety of aspartame for most people. The agency says its conclusions are based on more than 100 laboratory and clinical studies. Read the May 2006 FDA statement about aspartame.

Myth 7: Silver dental fillings increase risk of Alzheimer’s disease. Reality: According to the best available scientific evidence, there is no relationship between silver dental fillings and Alzheimer’s. The concern that there could be a link arose because “silver” fillings are made of an amalgam (mixture) that typically contains about 50 percent mercury, 35 percent silver and 15 percent tin. Mercury is a heavy metal that, in certain forms, is known to be toxic to the brain and other organs. Many scientists consider the studies below compelling evidence that dental amalgam is not a major risk factor for Alzheimer’s. Public health agencies, including the FDA, the U.S. Public Health Service and the World Health Organization, endorse the continued use of amalgam as safe, strong, inexpensive material for dental restorations. March 1991, the Dental Devices Panel of the FDA concluded there was no current evidence that amalgam poses any danger. Myth 8: There are treatments available to stop the progression of Alzheimer’s disease. Reality: At this time, there is no treatment to cure, delay or stop the progression of Alzheimer’s disease. FDA-approved drugs temporarily slow worsening of symptoms for about 6 to 12 months, on average, for about half of the individuals who take them.

What are the Statistics for Accidental Falls Among Elderly?

Unintentional falls are the leading cause of injury death among Florida residents ages 65 years and older and the fourth leading cause of injury death overall. In addition, falls are the leading cause of non-fatal injuryrelated hospital admissions in Florida. In 2011, 2,295 residents were fatally injured in a fall; there were an additional 61,036 were hospitalized for non-fatal injuries. Nearly three-quarters of these injuries were among residents ages 65 years and older. For every older adult fall prevented, the following costs can be saved; the median admission charge for non-fatal fall injury hospitalizations was $43,011; total charges excessed $3.4 billion. The median length of stay was four days. In addition to deaths and injuries as well as the costs associated with them, falls can have many negative consequences for older adults, including: FEAR OF FALLING AGAIN, FORCED RELOCATION FROM THE HOME, LOSS OF INDEPENDENCE, AND ALSO STREES IN THE FAMILY. By reducing their chance of a fall, older adults can stay independent and have an increased quality of life. The following practices are recommended for older adults to reduce their chances of falling and stay independent: EXERCISING REGULARLY, HAVE AN EYE DOCTOR CHECK VISION AT LEAST ONCE A YEAR, MAKING THE HOME ENVIRONMENT SAFER, AND REVIEWING MEDICINES WITH A DOCTOR OR PHARACIST.